Join us on Gary.Club and get our email newsletter and updates delivered directly to your inbox!

It's no easy task to get people to follow you online.

Building an online presence and social media following is harder than ever before. Especially, now that 4.65 billion people around the world have some form of social media.

Did you know the average Twitter user only has 707 followers and 391 million Twitter accounts have NO followers at all?

Since the most recent purchase of Twitter for $44 billion by the world's richest man, Elon Musk there's more opportunity than ever.

The buzz around Twitter is so hot it's causing people to flock to the social media channel. The sudden shift in the Twitter ecosystem is giving creators and Twitter users even more of an advantage to be seen and heard across the social platform.

According to recent data, there are approximately 217 million active users on Twitter, and user rates are steadily increasing.

Continue reading to learn how to get more followers on Twitter today. More importantly, this blog post will teach you how to consistently attract new followers at an affordable rate that doesn't require a ton of time, money, and energy.

Your Twitter page will be a quick turn-on or a huge turn-off. This is why building out a Twitter profile that correctly represents you and/or your brand is crucial to your number of followers.

When someone visits your Twitter profile, you want your photos, bio, and Twitter feed to give a good sense of who you are and what you have to offer.

Do you need a little Twitter inspiration to get started?

Take a look at the screenshot below of how @BarackObama, the #1 most followed Twitter account built out his profile. 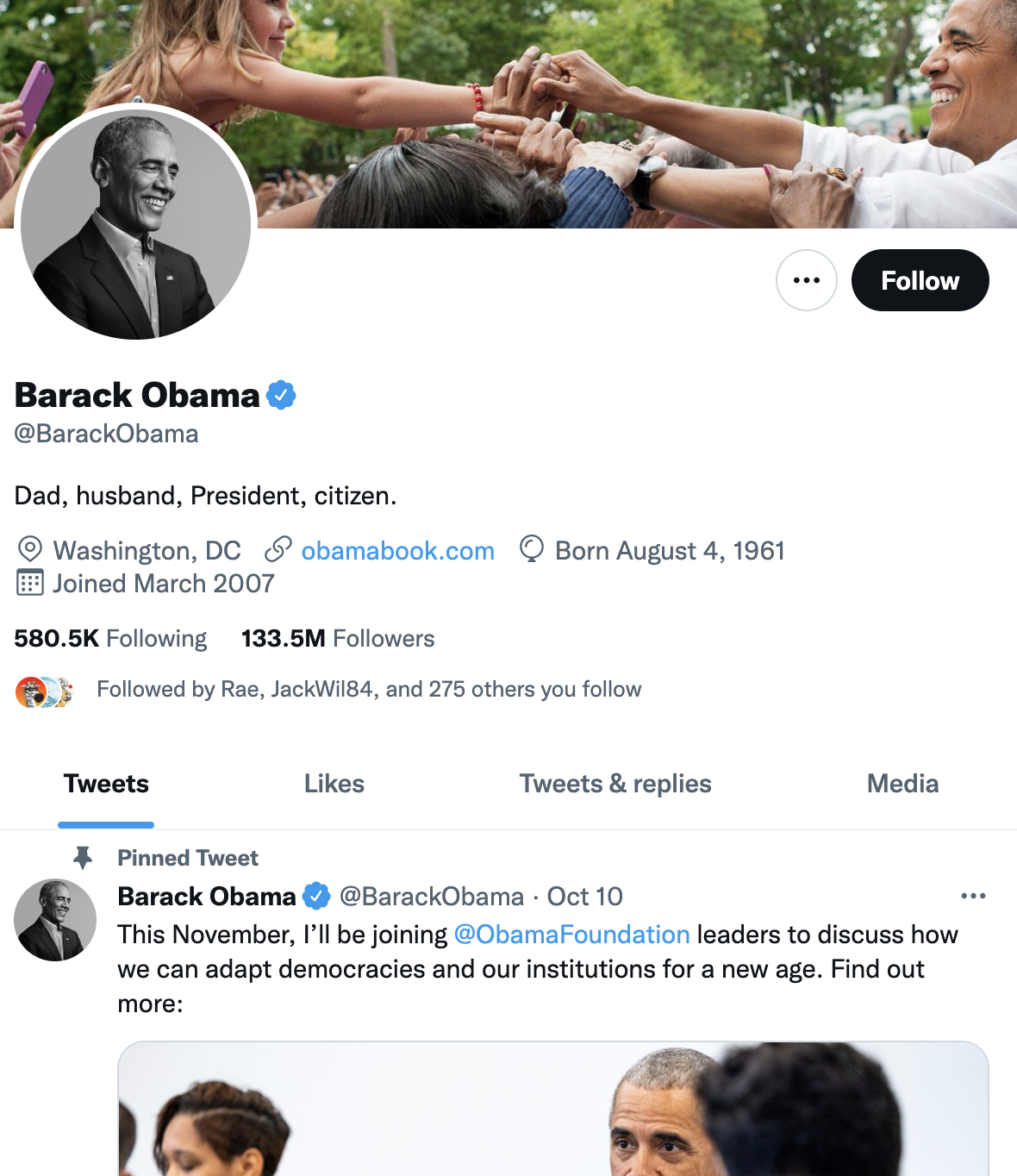 2. Elon Musk (the new and current owner of Twitter)

@elonmusk uses his Twitter profile to frequently switch between the different products, companies, or ideas he's into at that moment.

Here's an example when Elon Musk uses his Twitter page to sell the finest perfume on Earth.

Just look at the hilarious Tweet he sent that asks everyone to buy his perfume so he can buy Twitter. 😂

Please buy my perfume, so I can buy Twitter

Now, let's take a slight turn in industries and take a pit stop at the popular fast-food restaurant Wendy's.

@Wendy's Twitter profile is known for its firey personality and hilarious comebacks.

Everything about Wendy's Twitter profile is a direct representation of the popular fast food restaurant. Even the 444 Twitter accounts they follow represent an interesting fact about Wendy's.

if you get bored and need a laugh, read some of their hilarious comments. 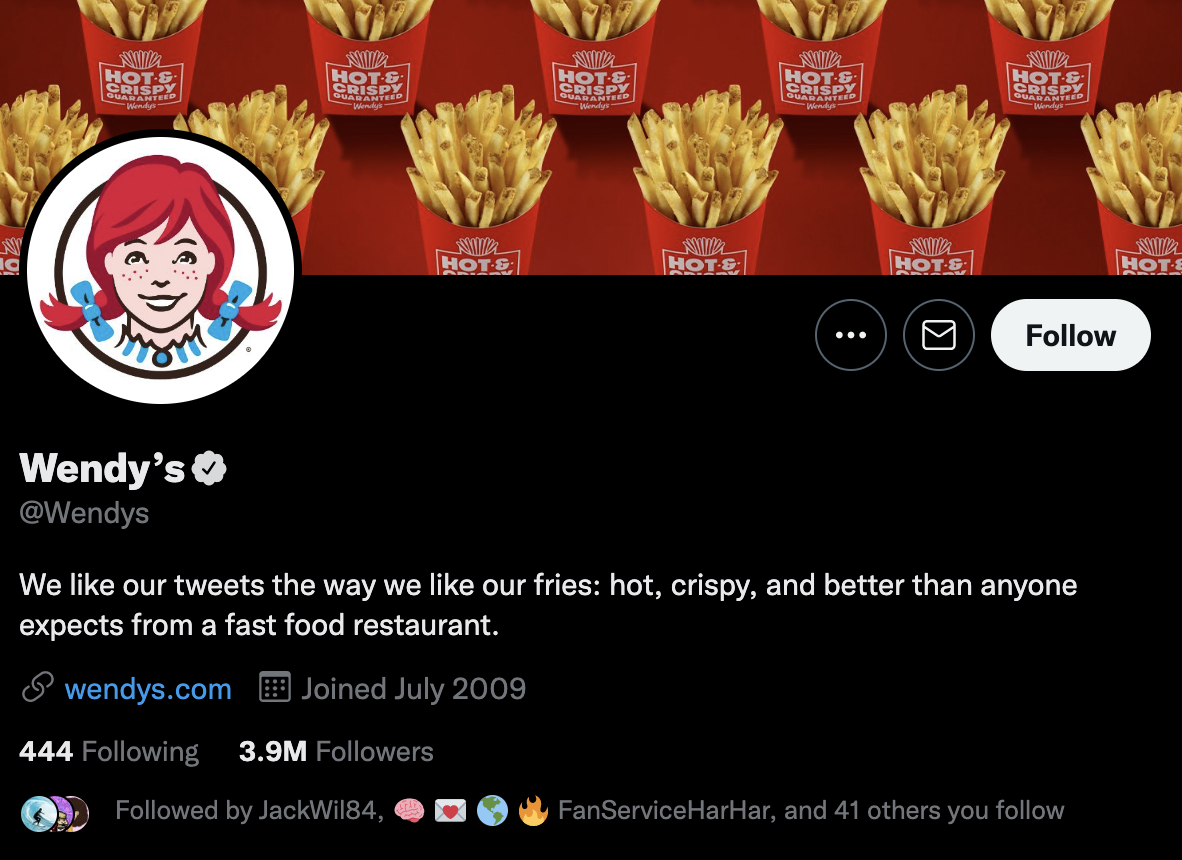 A great Twitter profile has everything to do with your message, how you stand out, and what makes you relevant to your audience.

There are many different theories for how much you should tweet.

We found it's best to aim for one main tweet daily.

When thinking of what type of content to create for Twitter, you can Tweet anything from one-word thoughts to videos, 30-second audiograms, infographics, blogs (that you turn into a thread), short-form or long-form content, shocking statistics, GIFs, memes, etc.

Stop posting plain old boring text and regularly switch it up by posting different formats and types of tweets. Switch it up by asking an interesting question, sharing a funny meme, or by retweeting someone else's content.

This is the time to show your personality and show what makes you stand out from everyone else.

One of the best ways to organically grow your Twitter following is to get conversational and get involved in different communities.

The way the Twitter algorithm works is it shows your tweets to the people you interact with.

The more you engage with other Twitter users the more the algorithm will push your content in front of new users in the feed.

The goal is to have interesting conversations with people related to your brand, niche, or topic of interest and find ways to add value anytime you comment, message, or engage with someone else on Twitter.

For example, retweeting one of our community members' tweets helps my and @Tribe community grow simultaneously.

LIVE in Gary Club with #giraffe crew - This is such a great community for #creators #creatoreconomy #creatorcommunity pic.twitter.com/NUMgWZZfjr

4. Connect With Your Community Using SocialConnector.io

You may not know it, but you already have a community on Twitter.

When your audience sees your tweets on Twitter you can reward or incentivize them to engage in your content.

You can reward your community for liking, commenting, and retweeting your tweets. This puts your message in front of your audience at the right time.

We call that the #R3MAT Method: The right message to the right person at the right time.

In the Tweet below, Gary uses Social Connector and $GARY COIN to incentivize his community and Twitter followers to attend a Twitter Spaces. The first 25 people who spend five minutes listening to that Twitter Spaces will get $GARY COIN airdropped into their crypto wallets.

The first 25 🦒 that spend 5 minutes listening to @farokh and @piovincenzo_ will get $GARY airdropped to your wallet! https://t.co/44xMQtSW4I

This is free money delivered right to your digital wallet that you can spend however you want.

Who doesn't want free money delivered to their crypto wallet?

So, why do you need Social Connector?  With SocialConnector.io you can:

One of the most important factors in growing a following on Twitter (or any social media network) is understanding what type of content performs best for that specific platform.

One of the coolest parts about using visuals (memes, quotes, images, videos) in your Twitter feed is visual content doesn't count toward Twitter's 280-character limit.

That means you have more space to say what you need, add hashtags, tag people, etc. Even though there is room to add more that doesn't mean you should overdo it.

If you decide to use videos on Twitter, it's essential to keep videos short, engaging, and to the point.

The ideal length for a video on Twitter is 15 seconds or less.

Studies show it takes ten seconds for viewers to decide whether they want to watch the rest of a video. It is even more critical to captivate your audience's attention and get them hooked in the first few seconds of your video.

We included a few Twitter video examples to help get you inspired by some of the best in the business like Rare Beauty, Herschel Supply, and Boxed Water. 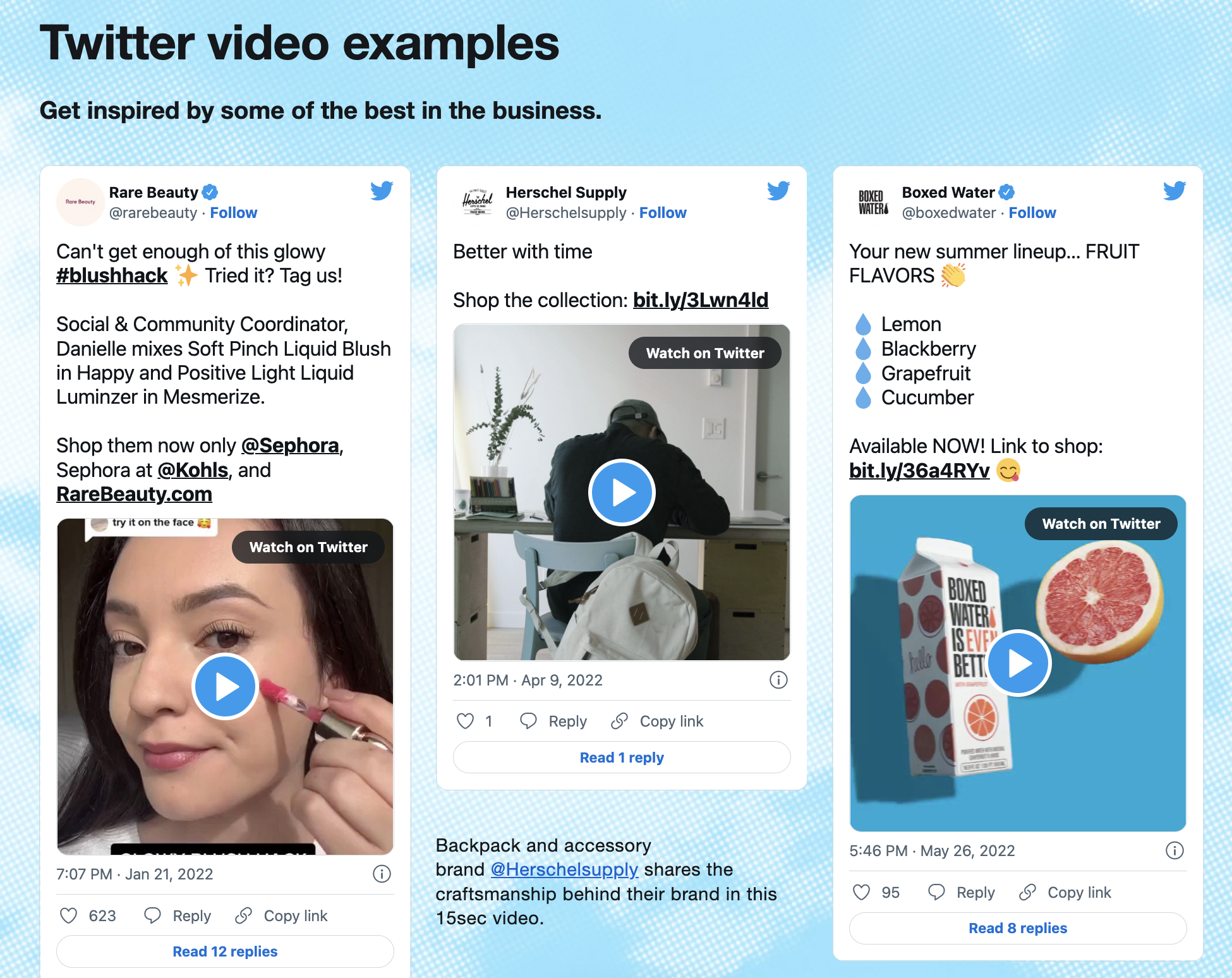 Any Twitter user can choose to host a Twitter space or join a live Twitter space to have conversations with other like-minded creators, brands, and business owners on a vast array of topics like Web 3.0, NFTs (non-fungible tokens), gaming, motivation, trending or world news, fashion, business, food, etc.

If there is more than one Twitter space live at once, swipe to the right to find more Twitter spaces hosted by people you already follow.

Twitter spaces are a great place to connect with new people on Twitter, gain new followers, and host interviews, debates, or even weekly meetups with your online community.

Take a look at the image below to see a Twitter space where we hosted a weekly meetup with our community.

When participating in Twitter spaces, it's common to gain a number of new Twitter followers simply by joining, talking, and sharing ideas in the space.

There's just something about connecting with people through social audio that is super powerful and quickly deepens relationships faster than before.

7. Add Hashtags To Your Tweets

Hashtags give your Tweets more discoverability.

It's best recommended that Twitter users include 1-2 hashtags (3 MAX) in their tweets.

Keep in mind that when users add too many hashtags to one tweet, it starts to look spammy, which is a big turn-off for users.

🚫 Before you go we must address this question! 🚫

But, is buying followers worth it? Should you actually buy Twitter followers?

The short answer is no.

When you buy Twitter followers you're likely buying bots. Bots aren't going to become loyal followers or buy your products and services.

Some creators and businesses have found that after paying hundreds or thousands of dollars for Twitter followers they start losing followers as soon as the next day.

Instead of worrying if your followers are going to disappear build your Twitter following authentically.

The tips in this blog will help you get new followers on Twitter and build a loyal tight-niche following of people who will consistently show up and engage in your social media content.

Remember, there is no one size fits all social media strategy.

The trick is not to get discouraged and stay consistent in whatever you do. Be patient with the process and test new social media strategies until you find a system that works best for you.

Content creators are taking over the internet. Everywhere you go, you see digital creators and social media influencers pushing out content on the web. More than 50 million people consider themselves influencers, and as...