Join us on Gary.Club and get our email newsletter and updates delivered directly to your inbox!

On today’s Clubhouse Creator, I am so excited to introduce Jeff Walker.

Jeff is a legend in the internet marketing world and has been at it for 25 years.

He’s one of the first people I ever started following online and has been a course creator for what feels like forever.

In fact, I still remember meeting him in 2014 and have been a part of several masterminds ever since.

After working with tons of mentors and coaches, I can personally say I’ve learned more from Jeff than anyone else in the influencer and product launch industry.

Needless to say, I was excited to have him as a guest on my Clubhouse Creator Show and wanted to share some of our biggest takeaways.

So how did he get started? Here's how it all began... 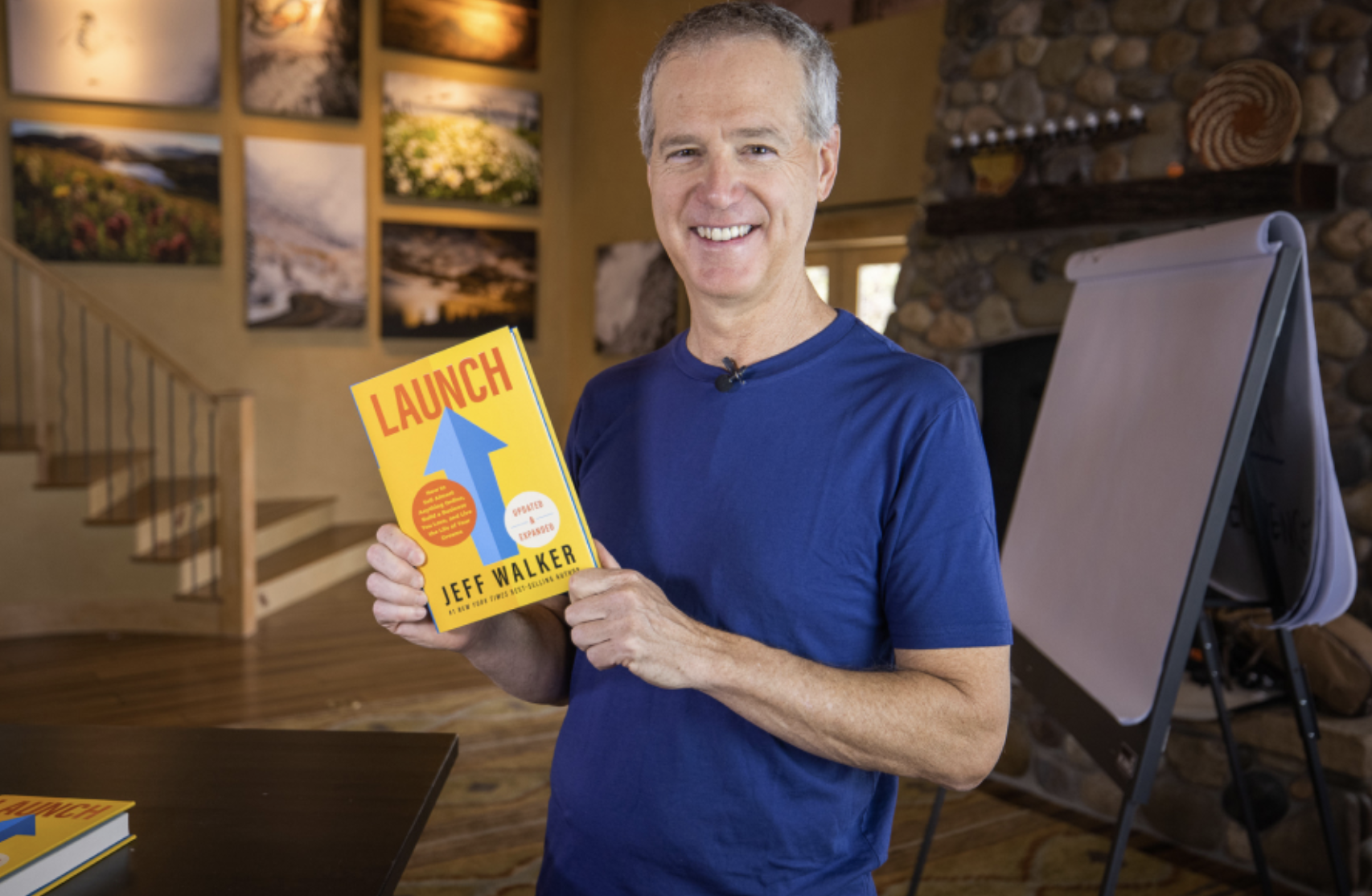 Jeff's story isn’t like many, and one of the many reasons he’s been such an inspiration to me and millions of others.

In our chat, 25 years ago, he said that he got his entrepreneur start, “After barely quitting his 9-5 before they fired him.”

Shortly after the corporate world, he was making sandwiches for his kids and being a stay-at-home dad for five years.

Eventually, his wife said if he could make $10,000 a year, it would help things financially.

But after being out of the workforce for half a decade, he wasn’t sure what he wanted to do or who would hire him.

So he decided grad school was the answer to getting back into the workforce. But to get into grad school, he needed something to put on his resume for the past five years.

At the dawn of the internet, he decided to start a newsletter about the stock market to beef up his resume.

This was a free newsletter where he shared tips about stocks, as he was passionate about finance.

This grew by word of mouth and actually helped him get accepted in grad school.

The week before his first class, he decided to try to monetize his email list. Even though he had no payment processor, sales page, or website, he figured why not.

Much to his surprise, it worked and his free newsletter turned into a “Free to fee” upgraded newsletter.

He pitched his small list via email and people actually sent him physical checks for a successful launch of $1,650.

That day, his life changed forever as the entrepreneurial spark became real.

On the first day of grad school, he decided to drop out, and the rest is history.

Then, a few short years later, he had his first six-figure launch in 2000 - which was unheard of in those times.

Now, he’s had more million-dollar days (and even hours) than most entrepreneurs could dream about.

While some of his tactics have changed since the early 2000s, his strategy hasn’t.

And he was gracious enough to even share the outline of his program, Product Launch Formula.

What Is The 3-Part Product Launch Formula?

During our chat, he shared more about his three-part formula for launch success.

Jeff explained the Three Keys To Have A Successful Product Launch Are:

According to Jeff, the first part of having success with a launch is storytelling.

Since stories are how people learn and what people remember most, this is the first ingredient for success.

As best-selling author Simon Sinek said, “Stories are attempts to share our values and beliefs. Storytelling is worthwhile when it tells what we stand for.”

With stories, it’s not to tell any story but the key is to tell an emotional story that will relate to your ideal audience.

It’s usually something that happened to you at the beginning of your journey and how you overcame it, or how you have learned better practices and tricks to get the job done quicker and more efficiently.

Since they’re probably in the same space right now, this story or stories that you share will resonate with them and establish yourself as an authority.

The second part of launching any digital product is nailing your sequences.

As Jeff broke down during our chat, there are four specific sequences for a successful product launch.

Here is a more in-depth explanation of Jeff's four sequences:

The first sequence to nail is your “pre-pre launch” sequence.

At this point, you aren’t selling anything (yet) and instead you are building authority, sharing consistent content, and indoctrinating your audience with your belief systems.

The pre-launch phase is the hype just before your big product launch.

As Jeff mentioned, this should last about 3-7 days total.

The goal is simple--get people super excited so that they mark their calendar in anticipation to invest in your offer when the doors open.

The three emails you need to include are:

The cart open phase is where the magic happens.

This is where revenue starts flowing in and people can finally enroll in your epic offer.

As Jeff noted in our chat, the cart open phase should generally last 5-7 days.

Any shorter than five full days and you can’t have any mistakes and is not recommended for most new online course creators.

But any longer than a week and things look desperate on your end.

As he said, “The last thing you want is a begathon and be desperate in your marketing.”

He was even generous enough to share what you should message in a five-day open cart sequence.

Finally, once your promotion is over, it doesn’t mean you are done!

After the cart is closed, you can still offer downgrades, extra payment plans, and other ways to work together.

Then, the whole sequence starts over again until your next official launch. Jeff stressed that most only do pre-launch and open carts and are missing out on big opportunities.

The final part of the equation is using the right triggers to get people to take action.

Jeff explained the four triggers are:

Paired together, these have helped him enroll thousands of students into his online offers.

The Keys To Longevity

Near the end of our epic talk, Jeff shares some of his tips on how he’s been able to sustain success all these years.

Jeff Walker's three biggest tips for how he has been able to sustain success are:

Finally, Jeff talked about something that resonated with me deeply: "The importance of staying in beginner mode".

As Jeff said in our chat, “There’s something called the curse of knowledge, where it’s hard to remember what it’s like as a beginner.”

For example, if you teach yoga to beginners, you likely forgot how hard the poses were to learn. Or, how awkward you felt in class around people who were much more advanced than you.

The same goes for any skill that you master.

But of course, to be a successful coach, you need to learn how to teach beginners as they’re the majority of your students.

To do this, Jeff says it’s vitally important to stay in beginner mode by trying out new hobbies.

For example, Jeff is going on a fly-fishing trip with some of the most avid fishermen in the world.

All they will do is eat, sleep, and breathe fishing on their journey.

Yet, he’s never done it and just has a passion for the outdoors. But, by hanging around these people, he inserts himself into beginner mode to feel like one of his students.

This will help him remember what it feels like to be a newbie and will directly translate to his own business.

If you’re someone who wants to become an online coach or course creator, learn from Jeff.

After doing it for 25 years, he knows better than anyone what it takes to successfully launch digital products.

Don’t waste your valuable time trying to learn it on your own.

Whatever you want to learn, there is someone who has already done it…so instead of making the same mistakes, find a mentor and download their knowledge.

You can do this right now by buying his new book, Launch, on Amazon and getting free bonuses too.

A Beginner's Guide To Discord

Discord is a platform that’s probably best known to gamers. Its text and voice interface makes it easy for gamers to communicate with each other during a session, helping teams coordinate or get together and chatting...

The Clubhouse Creator Show With Chris Do

Imagine having a goal to impact one billion people with your business…  Does that big number scare you? Motivate you? Or, a little bit of both? On the Clubhouse Creator show, I recently interviewed Chris Do, who...